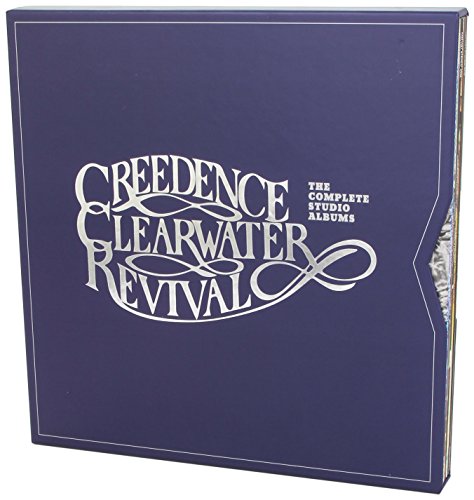 Undeniably one of the greatest rock bands of all time, Creedence Clearwater Revival has sold over 50 million albums worldwide since their formation in the 1960s, with their songs on consistent rotation on Classic Rock radio. The Complete Studio Albums (7-LP Box Set) brings together the legendary band's entire studio output in one comprehensive collection, all on 180-gram vinyl. The collection features all of the band's instantly recognizable hits, including 'Proud Mary,' 'Bad Moon Rising,' 'Fortunate Son,' 'Who'll Stop the Rain,' 'Lookin' Out My Back Door,' 'Travelin' Band,' and 'Down on the Corner.' Although their music evoked the raw, gospel-tinged sound of the rural South, Doug Clifford, Stu Cook, and Tom and John Fogerty actually hailed from El Cerrito, CA. Though the 1968 release of Creedence Clearwater Revival paralleled the flowering of the San Francisco music scene, the band had little in common with the 'San Francisco Sound.' On the contrary, the LP contained rock standards such as Dale Hawkins' 'Susie Q' and Screamin' Jay Hawkins's 'I Put a Spell on You,' (both of which became immediate hits) as well as original material by John Fogerty, who was to emerge as one of rock's most influential songwriters. 1969 was an epic year in the too-short history of Creedence Clearwater Revival. In that year alone, the band released three Top Ten albums (Bayou Country, Green River and Willy and the Poor Boys), scoring four hit singles and three charting B-sides. In addition to the incredible quantity and quality of their releases, the band also played the Woodstock festival, performed on the Ed Sullivan show twice and toured throughout North America. Coming off the momentum of the previous year, 1970 proved to be just as productive if not more for the band. Cosmo's Factory, cited in Rolling Stone's '500 Greatest Albums of All Time' list, came out that July, and included the hits 'Who'll Stop the Rain,' 'Lookin' Out My Back Door' and an 11-minute rendition of Marvin Gaye's hit 'I Heard It Through the Grapevine.' By the time of Pendulum's release later that year, Creedence was the top-selling rock band in the world, coming off seven consecutive Top 10 hits. In 1971, Tom Fogerty left the band to pursue a solo career, while the remaining members went on to record Mardi Gras, their final studio album, released in 1972. Though the band members went their separate ways so early into their careers, CCR's music remains as popular as ever, garnering new fans from every generation. Due out just in time for the holidays, this box set is a must-have for Creedence Clearwater Revival fans and vinyl collectors alike.
Show More
Reviews

Disclaimer: The price shown above includes all applicable taxes and fees. The information provided above is for reference purposes only. Products may go out of stock and delivery estimates may change at any time. Desertcart does not validate any claims made in the product descriptions above. For additional information, please contact the manufacturer or desertcart customer service. While desertcart makes reasonable efforts to only show products available in your country, some items may be cancelled if they are prohibited for import in Brazil. For more details, please visit our Support Page.